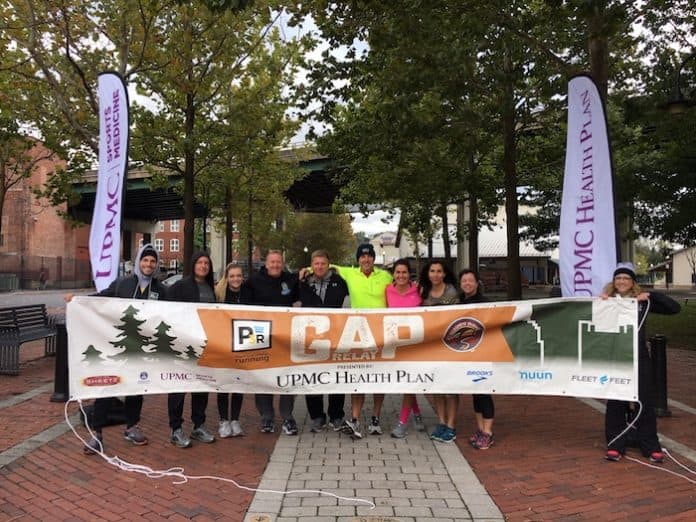 Pittsburgh Three Rivers Marathon, Inc. (P3R) is partnering with the Pennsylvania Environmental Council (PEC) to host its first carbon-neutral event and one of the first-carbon neutral trail running endurance events at the 2019 GAP Relays, a two-day non-stop 150-mile relay race along the Great Allegheny Passage from Cumberland, Md., to the Southside of Pittsburgh.

This partnership aligns with P3R’s year-round commitment to hosting “zero-waste” events and achieving green initiatives. In February 2019, P3R was presented with two “Zero Waste Achievement Awards” from The Pennsylvania Resources Council in recognition of their commitment to minimizing the amount of solid waste sent to area landfills during their two largest races.

P3R is dedicated to sustainability practices, working with the Pennsylvania Resources Council since 2011 to create a comprehensive Zero Waste Program during their year-long calendar of races. The organization’s largest event, the Dick’s Sporting Goods Pittsburgh Marathon achieved a 94% waste diversion rate in 2018, and the 2018 EQT Pittsburgh 10 Miler reduced its landfill waste by 1,500 pounds.

Along with the partnership, the Pennsylvania Environmental Council will be participating in the event by racing two teams.

After raising nearly $4,600 to bring awareness to autism, a group of runners is teaming up for a second year to race the 2nd Annual GAP Relay, a two-day non-stop 150-mile relay race starting on Friday, October 11, in Cumberland, Md., and finishing on Saturday, October 12, on the Southside of Pittsburgh.

The team, led by Team Captain Chris Buckley of Forward Township, was hooked after last year’s event and has been looking forward to GAP 2019 since crossing the finish line last year. “Autism Runs” participates for a higher purpose, to raise autism awareness. Buckley’s personal inspiration comes from his 28-year old son Tim who is autistic. “I have a son Tim who is autistic. He is nonverbal. He is my hero and my inspiration. I have run for the Organization for Autism Research in various races since 2014,” said Buckley.

This past August, Chris’ son Tim ran his first ever 5k race. The goal, Chris said, was “to get him to run to show that anything is possible.”

Team “Autism Runs,” comprised of four women and four men, is supported locally by sponsorships from LaCarte Enterprises and Community Bank. Both companies are led by presidents John LaCarte and Pat O’Brien who both have sons on the autism spectrum.

Training for the GAP relay with a motivational cause in mind has brought the team “Autism Runs” together, says Buckley, “Quite simply, our team has become family. Since GAP, the team has continued fundraising- from selling popcorn and candy at different times to working a food booth at community events.”

When it comes to the 2nd Annual GAP Relay, Chris encourages others to join, but, he says, “the most important thing is to find the right team. It’s not necessarily the fastest eight runners- although membership on “Autism Runs” required a resume of multiple marathons per runner- but finding the right personalities who come together as well.”

Anyone wishing to donate to team “Autism Runs” fundraiser for the Organization for Autism Research” can follow the link https://oar.z2systems.com/Buckley2019. To join a team or form one of your own, sign up for this year’s GAP Relay at www.gaptrailrelay.org.

Typically, clients working together might bond over a business dinner or a golf-outing, but co-workers from Intertech and its client Lucknow-Highspire Terminals are taking a non-traditional approach to team building by forming a team, named “Running on E,” that will conquer a 150-mile trail race along the Great Allegheny Passage as part of the GAP Relays 2019.

The team of 8 will divide 150-miles of trail into 24 legs to be completed in a two-day non-stop relay run. The 2nd annual GAP Relay will start on Friday, October 11 in Cumberland, Md., and will soar over rivers and ravines, cut through mountain tunnels and weave through charming towns all the way to the race finish line in the Southside of Pittsburgh on Saturday, October 12 where there will be a well-deserved post-race party.

Greg Johnston, “Running on E” Team Captain, explained the decision for the co to form a team, “We are running the GAP Relay to cement together a relationship between two companies, just like any other event in which two companies might participate.”

This is the team’s second year participating in the event after the inaugural race was successful. “Last year’s race provided an unforgettable experience,” Johnston said, “It was raining cats and dogs during my 9-mile leg at 2 a.m. It was pitch-dark and it was awesome.”

The team is comprised of runners from both Intertech and LHT Hats, residing all over the Pittsburgh region, so training as a unit is difficult, but they have shared their training through text to hold each other accountable to being prepared for race day on October 11.

A group of neuroscience graduate students is tackling a new challenge outside of the lab by teaming up to race the 2nd Annual GAP Relay, a two-day non-stop 150-mile relay along the Great Allegheny Passage Trail spanning from the race start in Cumberland, Md., to the finish line in the Southside of Pittsburgh from Friday, October 11, to Saturday, October 12.

The students in the have to get creative when finding time to train for the no-joke of a race. “As graduate students, we spend most of our time doing our dissertation research in the lab, so training can be difficult at times,” Team Captain Amanda Henton shares, “Creativity is a must when it comes to finding time to run. Some of us fit runs in before lab, some of us prefer to run in the evenings after lab and make good use of our headlamps, and some of us use the time in between experiments to go for a run in the middle of the day.”

While much of the student’s time is spent exercising the brain muscles, mastering the complexities of neurological behavior, running has been a way to build community and de-stress from their studies.

“For us, running and signing up for races together helps keep us motivated to keep up on our training,” said Henton.

And this is not the first race for the graduate students. Henton shared, “On our annual neuroscience department retreat in West Virginia, group runs are an annual fixture. Running has always been a great way to build community and de-stress from work. Most members of our team have run the Pittsburgh Half marathon, Great Race, PIND (Pittsburgh Institute for Neurodegenerative Diseases) 5K and many others. We’re all excited to add the GAP Relay to our list!”

The team is used to the endurance effort required of long-distance running as the same mentality applies to grad school.

“In a way, grad school is very much like a race that can feel like a hundred miles and an almost insurmountable task, but through hard work, endurance, and mental toughness, we can persevere. We are excited to embark on this adventure as a team!,” said Henton.