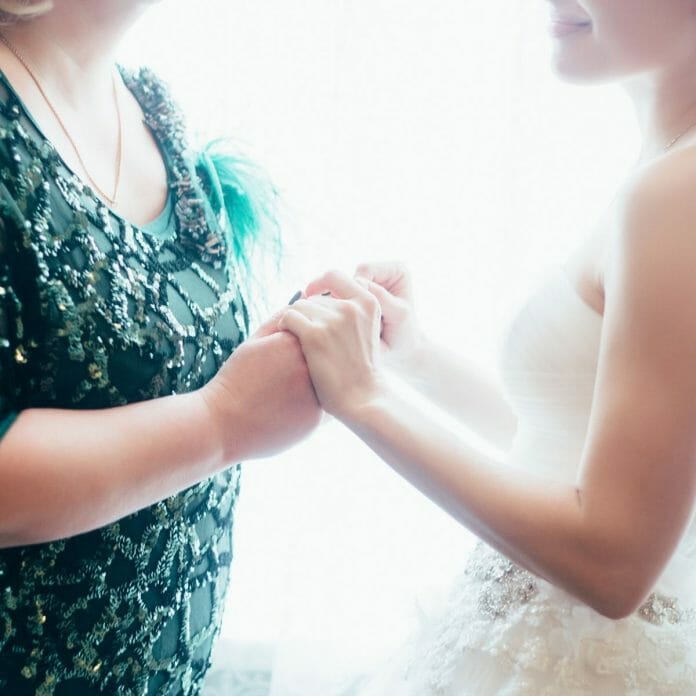 Even in families where adult children are close to their biological parents, and new spouses get along with ex-spouses, weddings unpack the emotional baggage. The best advice for stepmothers of the bride is to emphasize communication and classiness.

From the minute she has the engagement ring on her finger, a bride receives the message that the wedding is all about her. Typically, the bride decides the date, time, style, and size of the wedding. She determines who performs what role and where everyone sits. Contemporary couples have incorporated more cooperation into the planning, but to accommodate the interest of every member of blended and stepfamilies is a delicate and exhausting task. Someone must make the final decisions. Usually, that’s the bride.

If your stepdaughter’s mom has been in the picture all along and you are on good terms, the three of you should sit down early and discuss how the event will play out. Understand that, even if the birth mother has not had much involvement in your daughter’s life, a wedding is a milestone event that creates hope, even unrealistic hope, of reconciliation. The roadmap of tradition provides comfort in complicated situations. Tradition says the bride’s birth mother sits in the front row, on the aisle, with the father of the bride sitting next to her. Let it go. The stepmother can sit on the opposite side of the father. If no one is comfortable with that, the second row can be devoted to all the members of the stepfamily who are important in the bride’s life, including her stepmother.

Communicate from the Beginning

The worst thing that can happen to a stepmother is to discover at the rehearsal dinner that the bride has not assigned her any role in the event. Converse with your stepdaughter early in the planning process. Make sure she is aware of how much it would mean to you to be involved. In addition to discussing the ceremony itself, set times to clarify bridal showers, guest lists, and reception seating arrangements. The rule of thumb should be “no surprises.”

Resist the temptation to select a dress specifically to emphasize personal attributes that you think outshine the bride’s mother. Regardless of how their marriage turned out, your stepdaughter’s first mother looks forward to the special mother-of-the-bride role. The bride’s original mother should choose her dress first, and stepmothers should choose something that complements the overall style and palette of the event without the extra edge. There are so many style choices for mothers of the bride that both women should be able to find dresses that flatter them and keep the focus on the bride.

Don’t Turn Your Husband into a Referee

Keep the father of the bride informed of about roles, seating, who escorts who, and who gives toasts. Recognize that fathers of the bride have a special and cherished role in the wedding, too. Keeping score and issuing time-outs for squabbling spouses, current and former, are not part of that role.

Being relegated to the background at your stepdaughter’s wedding is better than allowing yourself to fall into the “wicked” role. Grace, elegance, and classiness will get you through.