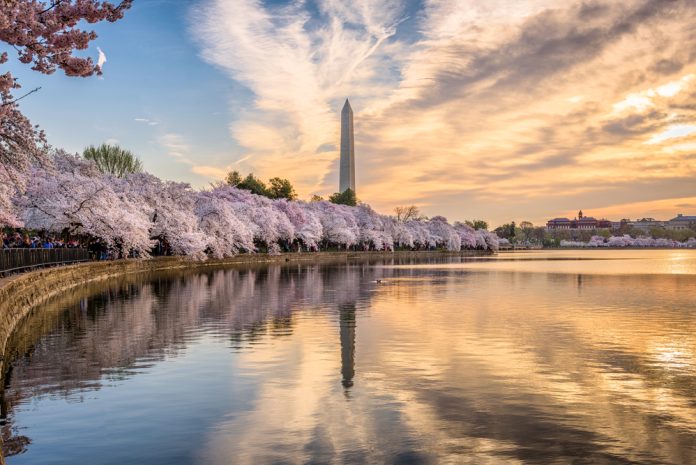 When we think about Washington DC, romance is not usually what comes to mind.  Especially with all of the partisan bickering, and the notion that DC is a town obsessed with politics to the exclusion of everything else.  But when I moved to DC thirty-years ago, armed with an undergraduate degree in political science and a drive to change the world, I quickly learned that Washington is about more than just legislation and regulations. It’s also a romantic place.

Yes, believe it or not, citizens of the city known for bickering and political shenanigans can generate as much heat and romance as any European hotspot. On Valentine’s Day, it’s not uncommon for Senators and Representatives to express their love for their spouses in official statements. It’s not uncommon for young lovers to get engaged under the Capitol Dome. And it’s not uncommon for DC citizens to put politics aside in favor of friendship and even romance—even across the aisle.

Why? Because DC is full of people who share a common vision: a desire to make life better for someone or something. We disagree about what needs to change and how to change it, but we all want to make a difference in the world. There are hundreds of policy issues to work on–from protecting the environment to providing access to health care, to generating support for small businesses, and everything in between. Even though we disagree on how those laws should be written, we can be cordial acquaintances, friends, and, yes, even lovers without rancor (although lively debate is certainly a part of life).

In the end, shared beliefs almost always outweigh disagreements. Washingtonians strive to “agree to disagree” and then discuss the matter over drinks. A lot of drinks.

This has led to some surprising but enduring romances. Consider the marriage of Mary Matalin, a former deputy campaign manager for President George H.W. Bush’s reelection campaign, and James Carville, a former chief strategist for President Bush’s opponent, Bill Clinton. Politically speaking, no two people could be further apart (unless it was Bush and Clinton themselves). And yet they were dating during the campaign! As the saying goes, politics make for strange bedfellows—literally.

You may be wondering how polar opposites like Carville and Matalin even met, much less fell in love. Well, you’ll be surprised to learn that Washingtonians socialize with people from both sides of the aisle all the time. In fact, going out for lunch, or drinks, or dinner, or brunch, or a baseball game, or a concert, or…well, basically, anywhere my Across the Aisleprotagonists Dallas and Grant went to discuss their business, is commonplace and, indeed, expected. Many of these settings are featured in my novel in which the main characters share a tense political rivalry—and a heated attraction.

Fortunately, DC has plenty of romantic venues for any couple—whether bipartisan or not—to meet, mingle and keep company. If you live in DC or are just passing through, here are some spots where love, regardless of political leanings, might bloom.

Love might quite literally bloom amid these stunning blossoms, which blanket the city every spring with their delicate white and pink petals. Wooing couples can enjoy them with a daytime paddle around the tidal basin, or while wandering through the dozens of neighborhoods in the city that boast these gorgeous trees.

Sunset sails on the Potomac

If hanging out on the water is your thing, consider a sunset sail on the Potomac, where you and that special someone can take in views of the Washington monument, Haynes point, The Kennedy Center, and even the famous Watergate building (although that might be a little too partisan for a romantic evening). Stop for dinner at the DC Wharf, where you’ll find dozens of restaurants. You can even go ice-skating on Transit Pier.

For those into music, DC has a wide variety of venues where you can catch acts from around the country—or even the world. Some favorites include the sultry and cozy jazz club Blues Alley in Georgetown, the ritzier Hamilton in Metro Center, or, for the more adventurous music-lover, the 9:30 Club in the Shaw neighborhood, which has been recognized by Rolling Stone as a top nightclub in the country.

Or if you gravitate toward plays, theaters in DC offer funny, dramatic, musical, epic, intimate—really any style of play you might be looking for. Looking for a classic “enemies to lovers” tale like Much Ado About Nothing? Check out the Shakespeare Theater. Want to laugh on a date with a funny audience participation-style romp? Look for the long-running “Shear Madness” adventure at The Kennedy Center. You’ll find more romantic (and fun!) options at the Arena Stage, the Warner Theater, the Wooly Mammoth—the list goes on and on.

The truly romantic-minded can’t miss this iconic mural in Union Market. You and your boo can take Instagram worthy photos in front of hundreds of hearts. While you’re there, enjoy the wine bars in the area, or, indeed, all around the city. Washingtonians love their wine. A lot.

Finally, DC is a city known for its monuments, and nothing can be more romantic than a moonlight stroll along the National Mall, where Abraham Lincoln, the nation’s first Republican President, is honored alongside Democrat President Franklin Delano Roosevelt (and his non-partisan dog Fala). The area also boasts memorials to Eisenhower, Jefferson, and Martin Luther King, whose statue is a favorite nighttime stop due to its blockbuster lighting—and “I Have a Dream” message.

Do people always put politics aside for love? Nope. Sometimes it’s a hot mess. Some people won’t “swipe right” for someone of the other political party. Some political differences are just too much to overcome.

But take it from this DC insider: love triumphs over politics much more often than you think.

Stephanie Vance wears two hats: romantic comedy writer, and D.C. advocacy guru with a 30+ year career. The boutique firm she heads, Advocacy Associates, helps associations drive citizen-based approaches to achieving policy change and Stephanie’s career has inspired her fiction. Her debut novel, Across the Aisle, stars two young lobbyists with opposing views involved in a racy, high-stakes legislative battle. An extensive traveler and avid scuba diver, Stephanie has visited six continents and dived everywhere from Iceland to the Great Barrier Reef. She attended college on a music scholarship (flute) and holds 3 master’s degrees—which she’s pretty sure equals a Ph.D.  Her nonfiction book The Influence Game made the Washington Post bestseller list. She lives in D.C. with her husband.