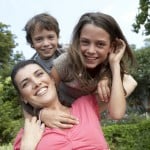 Divorce can be stressful, not only for parents, but children as well. Depending on their temperament and how both parents handle the divorce process, some children are affected more by divorce than others.

Parents can minimize any negative effects by trying not to fight in front of the children, keeping daily routines normal and consistent, and ensuring them they’re still loved.

“Parents also need to work hard not to bad mouth the other parent in front of the children,” says Dr. Laura Mee, a clinical psychologist at Children’s Healthcare of Atlanta. “The only exception is if one parent was abusive. In that case, be honest and let them know that’s why you got a divorce. Additionally, don’t let children become messengers between the spouses. Leave them out of that.”

Parents also need to pay close attention as to how the children are handling the divorce, she adds. “Parents need to be sensitive as to how they’re coping and to talk to them about it. If a child isn’t coping well—for example, changes in sleeping, eating, or increasingly becoming emotionally labile—it may be time to seek out professional help. Divorce can be so traumatic that it often helps to have someone who’s more neutral to be there to help support and talk to families about minimizing the emotional damage to their children.”

Since children of divorce often have to adjust to a shared custody situation, Dr. Mee suggests that parents try to keep them in the same school and in the homes they’re used to.

“This gives them something that’s still consistent and reassuring,” she says. “If they’re splitting time between two homes, allow them to bring things that give them comfort and makes them feel like it’s their space too. This will make them feel like they’re not just a guest, but part of that new home.”

At some point, children may also have to adjust to a new person in their parents’ lives.

“In this situation, it depends on what that person’s role was,” says Dr. Mee. “A parent having an affair with this person is a different situation than a parent dating three years after the divorce.”

This can be a negative and difficult situation if that person was having an affair that instigated the divorce. But if it’s three years later, that can be more positive and children might be able to handle it better.

“Either way, children will still want to be assured that they’re loved and looked after, and not shunted to the side by this new person,” says Dr. Mee.  “Many children, regardless of age, have a fantasy of their parents getting back together no matter how long they’ve been divorced. If it’s still difficult for them, they may benefit from talking to a professional.”. 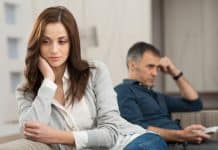 How To Effectively Communicate With Your Partner To Prevent Divorce

Life After Divorce? Start With Your New Home

So Cute, So Hard on a Marriage

If Your Kids Could Make The Rules of Divorce