Most of us are not prepared for what it asks.  Full of potential and hope, and dangerously frail, a relationship is often ill equipped for the challenges before it vulnerable to being damaged, sometimes, beyond repair.

Infidelity destroyed our marriage.  Love, that we were surprised by, healed us and created a new relationship better than the marriage damaged by an affair.   Here’s our story…

We met on a bitter January night in 1997, warmed by the nearby fireplace and an instant spark of attraction.   The evening at the Full Moon Café extended into a 2 a.m. conversation and a 10-year marriage.  It was the last thing either of us expected, yet the magic was undeniable.

By all accounts, we were a model couple.  Both well educated, successful, and upwardly mobile.  Jay, a highly trained professional with a doctorate in psychology alongside an MBA with a national practice.  Julie, a former Miss Oklahoma contestant and model, was a professional entertainer and sought after performance consultant.

It was a fairytale courtship, redefining the boundaries of reality.  By December of that year, we exchanged vows.   By September, ten years later, those vows would end in the aftermath of a devastating affair, life and death decisions and a painful divorce.  Three children and a decade of marriage later, the fairytale was gone.

On the outside, the scene was still storybook.  Success rewarded our family with a gorgeous home, comfortable lifestyle, and exotic vacations. Jay traveled the country as his practice and business boomed. Julie became a full-time stay-at-home mother to their three small children. Ironically, the more “success” we achieved the less successful life became.  Behind the storybook appearances, however, the foundation of the marriage had cracked.  The magic that drew us together was a casualty of the life we worked so hard to create.

When the affair was finally revealed, we had to face the ugly reality of infidelity.   What had started as a beautiful romance ended in tremendous pain.  Shortly afterward Julie was diagnosed with lymphatic cancer.  Divorce and a broken home followed. 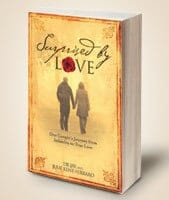 chose an affair as a misguided solution to normal marital challenges driven by my ego, and inexplicably, ignorance about what it takes to actually love someone for a lifetime.  You see, love indeed has requirements and by definition it asks us to learn more about how to contribute to another’s needs, wants and aspirations than it does to seek acquiring those things from finding the “right” person to give them to us.

To succeed in love has more to do with becoming someone capable of loving than it is about finding that “soul mate” who will love us and meet all our needs effortlessly.  That’s the fantasy, which fueled my infidelity.  We later learned that “soul mates” are created, and not found, and the path to designing true love begins with growing up and evolving in ways that a good partner can’t do for us.

In life, you can complain or you can create.  Our greatest freedom is to choose which of these will get our time and energy.

One leaves you victimized by the events and circumstances of life, the other allows you to be instructed by the wisdom in every failure.  Recovery from infidelity is no different than any serious life challenge. Contained within its experience is both pain and opportunity.  We chose to leverage the opportunity by accepting responsibility for how we failed one another by making everything else in life a priority except the core of what brought us together – our friendship; we together decided to evolve as individuals first, by learning how early wounds set us up to fail in love, and then, acquired the art and science for how to love more profoundly.

Sometimes your barn has to burn to the ground to see the moon.  Quite by surprise following the devastation of an affair and divorce, we discovered the best part of who we were in our failed marriage.  By using the pain of our failures as sober motivation, we made the necessary changes required of us to design the relationship of our dreams.  Instead of blame we chose grace.  Rather than vindictiveness, we loved from compassion for how we hurt one another.  Instead of being self-righteous and “right” about our story of the other, we got curious about how who we were in the old marriage contributed to it failing.   And rather than hiding in resentment, we embraced forgiveness as a pathway for a new future.  Beneath the ashes of our burnt lives within the debris of divorce the seed of a deeper, more mature love never before experienced was birthed.

We found life-altering love and true fulfillment in our marriage after an affair and divorce.  By working through the pain and committing ourselves to both healing and designing a new relationship, we found the secrets to a stronger, more satisfying marriage

Our book, Surprised by Love (www.surprisedbylove.com), is to inspire you with hope and possibility for all that is possible in love and marriage even when it fails.  We are living proof that there is still hope for an extraordinary marriage even after an affair.

We were both Surprised By Love.  What are you waiting for?