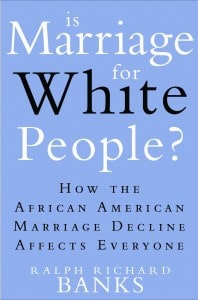 The groom can’t help himself.

His smile is ear-to-ear as he watches his bride slowly make her way down the aisle. He’s so in love with her, and for good reason: it’s their wedding day and she’s lovely, both inside and out, a vision in white. But what color is her skin?

According to Ralph Richard Banks, the odds are that it’s not black. Learn more in his new book “Is Marriage for White People?”

How many of your African American friends are married?

Probably fewer than those who wish they were. Ralph Richard Banks says that “African Americans have become the most unmarried people in our nation.”  Nearly 70% of black women are unmarried and three in ten may never marry.

Marriage used to be the ideal, says Banks. It was the only socially acceptable way to be sexually active and to procreate but in the 1970s, things changed, due in part to the availabilities of birth control and no-fault divorce. Still, marriage is the “goal” for most Americans.

One of the main issues within the African American community, says Banks, is that there’s a shortage of college-educated, single black men. Incarceration is the “most talked-about aspect of the numbers problem” and it’s one that lasts: jail records tend to confer a long-time stigma of prison that women won’t generally accept. Not even a post-prison college education erases that reluctance.

So what are the ramifications of the lack of available, desirable black men?

Black women rarely “marry down,” so a lot of single sisters are more willing to “man-share,” says Banks. More and more single black men are rotating several girlfriends because they’re “having fun” and because there’s no urgent reason to behave otherwise. Black women feel powerless to stop this because “black men are in short supply” and a part-time relationship is better than nothing.

So what can be done?

Banks has one main idea: black women don’t need to remain single. They can open their minds and “marry out.” Though it seems to be a conundrum, “If more black women married nonblack men, more black men and women might marry each other.”

Without a doubt, there will be some readers who’ll want to throw “Is Marriage for White People?” out onto the street. Like any author with a possibly-contentious subject, Ralph Richard Banks may anger some people – but there will be many who will applaud what he has to say.

Banks, a married educator, has statistics and facts to back up his information – so much so that about a third of this book is referential. He takes things further with interviews and an explanation on how he came to his thought-provoking conclusions. This is an intriguing book, both for the information that Dr. Banks presents and for the results he ends up with.

But will it work?  That remains to be seen but, in the meantime, “Is Marriage for White People?” is guaranteed to start a lot of conversations. If you’re single and don’t want to be, vow to read this book soon.

The Bookworm Sez: “You Are What You Wear” by Dr. Jennifer...

The Bookworm Sez: “Death of the Cheating Man: What Every Woman...