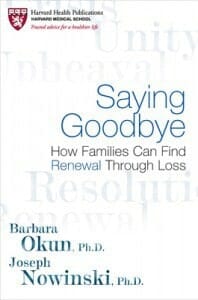 The first word that entered your mind was “not.”

The new reality is, though, that you’re faced with making some somber arrangements that you’re gut-sick to have to make. But, as you’ll see in the new book “Saying Goodbye” by Barbara Okun, PhD and Joseph Nowinski, PhD, embracing those arrangements and feelings might also be the first steps toward the healing that you and your family will need.

More than forty years ago, Elisabeth Kübler-Ross defined the five stages of grieving as denial, anger, bargaining, depression, and acceptance. Many still adhere to that model but Okun and Nowinski say that it may be outdated. Because of advances in medicine, death today tends to be less of an event and more like a process.

Okun and Nowinski say that today’s “new grief,” contains five different, more fluid, less defined steps going through that process. “New grief” gives families more time to prepare, to change outcomes, and to confront old family issues that need to be resolved before anyone can move on.

“The fact is that grief today is a family matter as much as it is an individual one,” the authors say. Today’s grieving “means moving forward together as a stronger family after a loved one passes.”

At the outset of a protracted illness, families generally start at Stage 1, which is crisis. It’s a time to slow down, and build the resilience needed in the coming days. In Stage 2, unity, a support team is assembled and someone is appointed to deal with insurance companies, medical services, and “social service mazes.”  In Stage 3, upheaval changes family dynamics as uncertainty continues. Here, communication – on both sides of the illness – becomes key.

Caregiver burnout can arrive in Stage 4 (resolution). This is also a time when unresolved issues tend to be soothed. Hard choices and decisions are made in Stage 5, the renewal phase, which also encompasses the end of one existence and the beginning of another.

They say that there are two inevitabilities in life. One of them is taxes. The other is a reason to have “Saying Goodbye” on your bookshelf.

Authors Barbara Okun and Joseph Nowinski – both psychologists – use stories and keen observations to explain various, but generally categorized, ways that families deal with terminal illness and the long dying that accompanies it. Keep in mind that this is a guidebook, as the authors are careful to stress, and not a final authority; like the iconic Kübler-Ross methods, “new grief” steps aren’t exact or clear-cut.

It is clear, though, that anyone, especially Baby Boomers, could benefit from having this information at hand.

This is one of those books you hope you never need, but that should read before you do. When you know you’ll be “Saying Goodbye”, here’s help you should not miss.