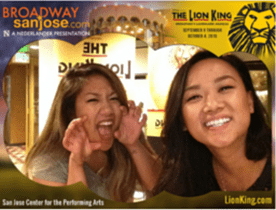 Few people appreciate the power of word of mouth more than 25 year old entrepreneur Jolina Li, founder of BuzzyBooth Company. Li grew up working in her parents’ restaurant, where she learned how hard it is for businesses to create a buzz.

That was her inspiration for BuzzyBooth, an ingenious digital photo station that leverages America’s obsession with posting selfies to generate social media exposure.

“We basically make it easier for customers to promote for the business,” says Li, “In return offering them a free, fun amenity.”

In a nutshell, the client rents a BuzzyBooth—a portable unit that’s so compact, it fits in any business location—for a month or more. Once it’s shipped, the business sets it up where its customers will find it. Their customers are invited to snap a free photo, and at the click of a button, share it on Facebook, Twitter, Instagram, or by email.

The clever catch: the photo posts with an eye-catching customized graphic frame that promotes the business, along with automatic caption that shows the current deals or announcements for the business. Also, the customer’s email is captured for future marketing use.

It’s all surprisingly easy. Set up takes about 15 minutes, thanks to a how-to video. It’s inexpensive. Clients can rent it for $199 a month (with a 12-month contract) to $500 for one month with no contract. Best of all, it’s effective. Li reports that a number of clients ultimately purchase their booth, which sells for $2,500, once they see their return on investment.

Broadway San Jose, a theater company in San Jose, used BuzzyBooth to promote the opening of its new show, The Lion King. During its one-month run, nearly 1300 photos were taken, about half of which were shared, resulting in 215 new fans, more than a 1000 email captures, and 103,000 social media impressions.

“There is no easier, fun way to get the “Selfie” crowd to work for you,” said Sol Castillo, Broadway San Jose’s Group Sales and President’s Club Manager.

“Our Facebook ‘Likes’ went up, our website gained traffic, and our audience got a great keepsake photo of their show experience. There were long lines for the BuzzyBooth at every performance.”

“My original target market was to cater to the restaurant industry,” says Li, “But as soon as we launched, we started receiving interest from all types of businesses. It’s been very exciting.”

Evan Chen, owner of TOA Asian Fusion, a restaurant in Huntington, New York, says, “BuzzyBooth helped us so much. While I focus on what I do best, which is running a business and making customers happy, it helped us get more online exposure and provided fun for customers while they wait for their food.”

“I see the increase in our social media followings, and those email captures will be very useful as we introduce new dishes.”

BuzzyBooth is not Li’s first business venture. Most it likely, it won’t be the last.

Li seems to have been a born entrepreneur and tells numerous stories of starting small ventures during her youth.

“I sold things on eBay in middle school to buy my first computer. I launched an online clothing shop in high school but failed. I started a dessert cafe after college and then sold it before making the move to California to start and focus on BuzzyBooth.”

“I love experimenting with new ideas, learning what works and what doesn’t. I have both failed and succeeded, but the satisfaction I get from the wins outweighs the losses.”

Forward is the Only Direction

A Blueprint for Life After Divorce: Pittsburgh Author’s Book Inspires and Empowers Others to Find their “New Normal”

Moving Past the Pain and Moving Forward After a Divorce