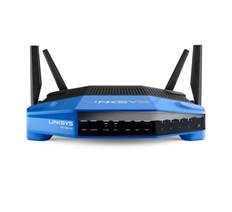 Engineered to deliver best-in-class networking performance, the Linksys WRT1900AC Dual Band Gigabit Wi-Fi Router delivers an unmatched user experience and ultimate Wi-Fi coverage for your home. We’ve upgraded the iconic Linksys blue-and-black design and outfitted the router with the latest Wireless-AC platform along with the industry’s first four antenna configuration with a powerful 1.2 GHz dual-core ARM to provide exceptional signal strength and range to simultaneously support multiple users. We also added a unique dual eSATA/USB 2.0 and a USB 3.0 port to the Linksys WRT1900AC to conveniently connect an array of devices and experience lightning-fast transfer speeds.The WRT1900AC features exclusive SMART Wi-Fi software to monitor and control your network anywhere and anytime. It’s our first router to offer the Network Map smart tool, providing an intuitive at-a-glance view of your entire network. For advanced users who want to customize their firmware, the WRT1900AC stays true to its lineage by offering an Open WRT compatible firmware with Open Source ready capabilities that allow advanced users to expand the capabilities of the Router. 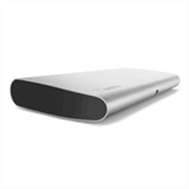 nio Tag, which prevents the loss of your smartphone and other valuables. As the first Bluetooth-powered security tag, you simply attach the nio Tag to any item you want to keep track of while out and about (i.e., purse, luggage, laptop case, child, etc.) or you can carry the nio Tag to secure a smartphone or iPad. Should you become separated from the item, an alarm will alert you – acting as a buddy system or an invisible, electronic leash.

Monoprice (www.monoprice.com) specializes in offering high-quality tech accessories for bargain prices on its e-commerce site. Here’s a selection of the latest from Monoprice:

Headphones and earbuds: Never miss a beat with these two new earphone products, perfect for music lovers on the go.

These new headphones deliver a rich surround sound audio experience with impressive range in convenient and affordable package. Features include:

These noise canceling earphones are perfect for those who don’t want to carry bulky headphones on their travels. Features include:

Mobile chargers: Give your iPhone®, Android smartphone, or other USB device a charge with these Battery Backup and LED Flashlight chargers.

Battery Backup and LED Flashlight for iPhone®, iPod®, and other USB Mobile Devices ($24.31, #10575) — This sleek battery backup appears as slim as an iPhone and features a 3500mAh capacity, which is enough to charge a smartphone from a dead battery to full at least once.The battery also features an LED flashlight so you can insert your keys in the door lock without fumbling around in the dark.

Battery Backup and LED Flashlight for iPhone®, iPod®, and other USB Mobile Devices  ($29.20, #10577) — This battery backup features a 5200mAh capacity, which is enough to fully charge an iPhone at least two times. Just plug your charging cable into the battery and it starts charging automatically. It has a maximum charge output of 1.5A. The battery also features an LED flashlight for use.

Mobile Audio: Take your tunes with you wherever you go with these new speakers.

Appearances can truly be deceiving with this compact speaker that delivers exceptional sound quality. Features include:

With a stylish appearance that resembles a throwback to the 1970s, this compact but powerful speaker provides a modern sonic performance comparable to much larger speakers or boom boxes. Features:

UWater – The Ultimate Active Lifestyle Companion
UWater offers the world’s smallest action audio gear that goes from sand to surf!  Designed to go anywhere, weighing just one ounce, the UWater G5 is a 4GB 100% waterproof MP3/FM player that can be attached to goggles, a headband, armband, swimsuit, wetsuit or belt so that you can play your favorite  songs or listen to audio books while out enjoying your favorite water sports, including swimming laps!  UWater G5  is available for $60 at www.gearedtobefit.com