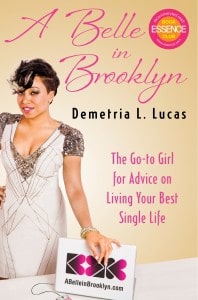 Men don’t get it.

They think that when you get together with your girlfriends, you all spend time talking about recipes, gossip, and children. Like there’s nothing more on your minds.

They’re kind of right. That is what you talk about… at first.

And then you talk about men. How they’re so great. How they’re so irritating. How you just don’t “get” them. But if you read “A Belle in Brooklyn” by Demetria L. Lucas, you’ll get a little guidance.

Ever since she was a girl growing up in Maryland, Demetria Lucas wanted to be Nola Darling. Nola, a character in Spike Lee’s first film, was young and single with a “harem of men vying for her affections.” Lucas could see herself in that role, and she knew where she wanted to do it: in Manhattan, where she also longed to be a magazine editor.

Seven months after grad school, she moved to Brooklyn after having landed a beginner job in which the “pay sucked.” But the parties were free and open to a newbie in the industry, and that’s where the cuties were.

As the months passed, Lucas moved up to newer and better jobs, with the side hope of moving up to newer and better men. She had lots of male friends, but things were bumpy. Dude left her for another woman with a bigger booty. Dakar was a good friend and mentor, until he did something totally creepy. She thought Greg was The One, until he moved away without asking her to move with him.
Why was dating so difficult? Was it because men were reluctant to commit? Were they on the lookout for a woman with a smaller waist or longer “real” hair? And what about skin color? Did that matter, too? She polled her Male Mind Squad (a group of guy pals) and doggedly continued to date.

A date, Lucas points out, is just that. It’s a couple hours. It isn’t a commitment. It isn’t forever.

But forever wouldn’t be such a bad thing, either…

Did you ever see the Sex in the City movies? Well, this book is just like them, only so, so much better.

Reading “A Belle in Brooklyn” is like curling up in your bestie’s living room with a chilled glass of wine and a couple hours of dishing. It’s like stepping out to find a “may-an” with a woman who’s done your homework for you. It’s like getting advice on a broken heart from a woman who’s mended a few of her own.

Author Demetria L. Lucas doesn’t preach here, though. She tells her story in a way that feels like a novel embedded with quite a bit of subtly useful advice. I also enjoyed that Lucas isn’t stuffy; this book has the feel of a letter from a friend, a series of emails, or a good, long text.

If you’ve decided that decent dating experiences are the exception rather than the rule, you need this book. Look for “A Belle in Brooklyn”… and then get it.

The Bookworm Sez: “Getting Past Your Breakup” by Susan J. Elliott