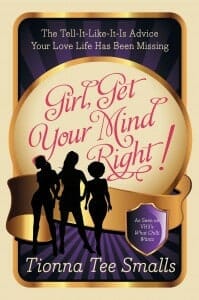 That fool has done it again.

You made plans for the two of you to hang out the other night. You cleared your schedule and told your girlfriends that you were off-limits, that you were spending time with him. You bought something nice and you waited.

And waited. And he never showed up. Said he “forgot”, but you know where he was: he didn’t forget. He was out with his boys.

Are you tired of him and every man like him? Then maybe it’s time to read “Girl, Get Your Mind Right!” by Tionna Tee Smalls.

For way too long, you’ve been putting up with players, little boys, or project men who need changing, but this time – you’re done.

Congratulations. Rule Number One in this book is that you are the only person who can make the changes you need to have a great relationship.

The key to that strong relationship, Smalls says, is to act cautiously. If you meet a man who seems like The One and he’s gone after one date, you moved too fast. You probably didn’t get to know him well enough, or you didn’t give the relationship enough time before you started planning your wedding and naming the children.

Next time, learn about him before you move forward. Next time, listen to him instead of doing all the talking. Slow is the name of the game in relationships, and that includes giving up your clothes for him.

Okay. You’ve taken your time, you’ve gotten to know him, but you know he’s not very into you. Smalls says that you can’t force him to make you important in his life. If he’s got better things to do than be with you, if he’s spending his time with another woman instead of with you, it’s time to walk away. And whatever you do, don’t call his next chica on the phone.  She’ll find out about him soon enough.

Maybe you’re thinking there aren’t any good men out there. Then you’re looking in the wrong places, Small says. The right guy might be right in front of you all along. And if he turns out to be Mr. Wrong, well, just be patient. Smart women know that the next man will be along in about 15 minutes…

When I first started reading this book, I thought it might be more for younger women than not. Author Tionna Tee Smalls, who is VH1’s “go-to girl” for love, is blunt and in-your-face, and she talks about some things that might make Grandma blush.

But then, I started to realize that even a newly-dating Grandma needs to know everything that’s in this book. This isn’t just a book for young African American women. It’s a book for women – period.

“Girl, Get Your Mind Right” is empowering, cautionary, and there are a few things that you will disagree with in here, but give it a whirl if you’re ready for a relationship. Whether you’re eighteen or eighty, it will keep you from being a fool in love again.

The Bookworm is Terri Schlichenmeyer. Terri has been reading since she was 3 years old and she never goes anywhere without a book. She lives on a hill in Wisconsin with two dogs and 12,000 books. For more information, visit bookwormsez@gmail.com..