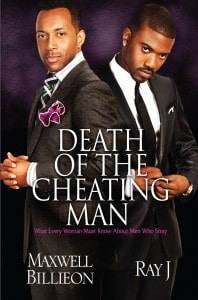 You almost can’t believe it.

It began when your man started staying late after work. Said he had extra projects, but when you called him, he didn’t answer the phone. Then he started disappearing on weekends and taking long showers when he came home. Now you’ve discovered pictures of other women on his phone and mysterious numbers in his address book.

You don’t want to believe that he’s cheating on you but he might be and, according to authors Maxwell Billieon and Ray J, there may be a simple reason why he’s doing it. In the new book “Death of the Cheating Man,” they explain.

The world is filled with temptation.

Maxwell Billieon says that’s the reason why he wrote this book: because both men and women need to know how to beat infidelity to save their relationships and families. Cheating, he says, is everywhere and it’s because of two things: men like to conquer and they’ve never learned how not to cheat.

There are many different kinds of cheaters, says Billieon, just as there are many ways for a man to step out on his woman. And as it often happens, women will cheat as a way to get back at their man who cheated.

Billieon says that there are ways to stop this insanity. Sit down with your partner and discuss The New Monogamy, which may include a once-a-year “hall pass.”  Discuss how infidelity has consequences. Stop expecting prominent men to be “more than human.” Teach your man to be faithful and be his “ride-or-die” woman.

“Death of the Cheating Man” is a wobbly book.

On one hand, there are beneficial, helpful passages in these pages, a few of which make enough sense that it’s sometimes hard not to agree with what authors Maxwell Billieon and Ray J (who’s been linked with Whitney Houston) say.

On the other hand, it’s astounding to see statements like this: “Women are afraid of truthful men…” or “… human females have way too much information and that has messed up the natural state of things.” That sounded pretty outrageous to me, particularly when you add in the advice on giving your man what he wants, when he wants it.

I think that there’s good advice in this book, but it’s going to require not just a grain of salt, but a whole buckets’ worth. For most smart, strong women, though, “Death of the Cheating Man” is unbelievably unhelpful.

The Bookworm Book Review: A History of Marriage by Elizabeth Abbott

The Bookworm Sez: “30 Lessons for Living: Tried and True Advice...