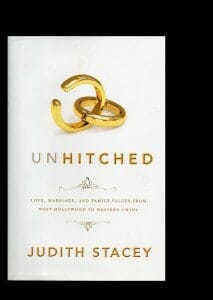 The new neighbors moved in last week, and you don’t quite know what to think.

There are three adults in the household, and two of them seem to be married but you don’t know which two. They obviously work, but at the oddest of times and there are bikes in the yard, though not on any schedule that your kids can figure out.

Yep, you got new neighbors, and while it’s really none of your business, they sure ain’t The Cleavers.

And, says author Judith Stacey, neither is anybody else anymore. In her new book “Unhitched: Love, Marriage, and Family Values from West Hollywood to Western China”, she explains.

Not so long ago, the definition of “family” was easy: a mother, a father, and two or three kids, preferably at least one boy and one girl. But these days, says Stacey, “family” has a whole new face.

Four out of five households in the 1950s consisted of married couples, but today’s homes are filled with unmarried adults (with or without significant others) and most, without children. The divorce rate has something to do with that, as does a modern willingness to cohabitate without marriage.

Conversely, says Stacey, “love, marriage, and baby carriages are all the rage among lesbians, gay men, and transgendered people.”  As each state allows for same-sex marriage and gay couples rush to make their commitments legal, the definition of family is changed even further – particularly if the unit consists of additional adults and especially when children are born or adopted into the household.

Overseas, things are no less complicated: in South Africa, heterosexual monogamous marriages are disproportionately reserved for whites, while plural marriages “belong exclusively” to black, heterosexual men. Cultural-minded South African males “unapologetically” take second or even third wives, and while the women often aren’t happy about the arrangement, as Stacey discovered, polygyny can solve a lot of issues for those involved.

So is marriage even necessary?

In rural China, the answer is “no.”  With matriarchal households and “rules” for coupling, Mosuo men and women might agree upon a commitment ceremony, but there is no marriage. Instead, adults remain in the homes of their mothers, and children – the gender or paternity of which matters little – are indiscriminately raised by all.

Between now and the next election, you’ll be hearing plenty about “family values.” As an antidote, “Unhitched” offers an intriguing look past the politics.

Author Judith Stacey – who is also Professor of Social and Cultural Analysis and Sociology at NYU – has extensively studied families for decades; this book is a wrap-up of studies, as well as a myth-debunker. I found the information here to be somewhat dry (in an academic sort of way), but it’s admittedly hard to stop reading and pondering the fascinating implications of the changes that Stacey describes.

I think, if you’re a people-watcher, are interested in culture and its changes, or have a deep interest in marriage rights one way or the other, this is one can’t-miss book. For you, “Unhitched” is a book to cleave unto.