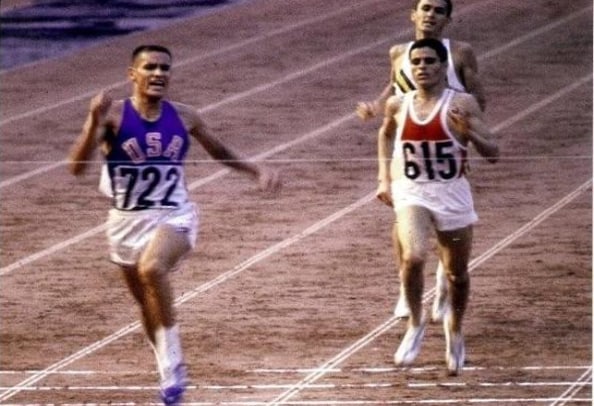 Growing up, Columbus Day was simply the day we celebrated the arrival of Christopher Columbus in the Americas. Today, the focus is changing to the havoc wrought upon indigenous people by this European influx and their subsequent struggle for equality. As I was considering this new point of view, an unexpected arrival of a different kind came to mind.

On this date fifty-five years ago, on the Olympic tract in Tokyo, Japan, an unknown Native American named Billy Mills blew past two predicted winners over the last thirty yards to arrive first at the finish line of the men’s 10,000-meter race, issuing a halcyon call to the world about racial equality. One of the biggest upsets in Olympic history, Mills completed his epic run in an Olympic record time of 28:24.4. However, I recently learned by reading his book, Lessons of a Lakota, that his journey to Tokyo was anything but swift. In fact, it took a life time.

Billy was one of eight siblings born into poverty on the Pine Ridge Indian Reservation in South Dakota in 1938. Conditions were miserable, with alcoholism, hunger, diabetes, and other maladies wide-spread. He lost his mother, a one-quarter Lakota Sioux, when he was seven and his father, a three-quarters Lakota, when he was twelve. He would be sent to the Haskell Indian School in Lawrence, Kansas, a boarding school run by the Bureau of Indian Affairs.

As I read, I was reminded of my father who was orphaned when his mother died from child birth in a tiny west Texas town and his father succumbed to alcoholism. There was no hiding the fact that my father’s aunt and uncle had taken him in as a baby. So hurt was he by taunts from other children who lived with their natural parents, he tried to spare my sister and me from any hint of embarrassment by hiding his past. When I accidentally discovered his secret, I lapsed into bitterness and self-pity over never having known my true grandparents. It was the only time I saw my father cry.

In his career as a motivational speaker and advocate for Native American values, Mills has often singled out these destructive attitudes as traps for the unwary especially during their formative years. As a track star at Kansas University he remembered growing angry and confused about his lineage, especially in the face of racial bigotry. Half white and half Native American, he didn’t know where he fit in, who would accept him.

He took solace in the Lakota teachings passed down to him by his father. “When my mom died,” Billy recalled, “Dad told me I had broken wings, but I could grow new ones if I looked beyond self-pity and hate. They will only break your soul. Someday you will have wings of an eagle. Find your dream, son. It’s the pursuit of a dream that heals broken souls.” Billy dreamt of being an Olympic champion.

I realized my mother had told me much the same thing as I struggled to understand my father’s secret. How he had tried to show me by his conduct the best way forward. I remembered her saying, “Why do you think he always pulls for the under dogs and has taught you to do the same?”

After his famous upset win, Billy had this to say about underdogs: “My Indianness kept me striving to take first and not settle for less in the last yards of the Olympic race. I thought of how our great chiefs kept on fighting when all the odds were against them as they were against me…”

As the anniversary of Billy’s victory approaches, I can see how he won by saving his best for the stretch.

With my own race almost run, I hope I can do the same.

Malcolm Gibson can be reached at mgibson@mdgibson.com. Gibson is also the author of the new novel Ascending Power. His work has been featured in The Houston Chronicle, The Beaumont Enterprise, The Galveston Daily News and a variety of magazines Gibson is also a practicing lawyer in Houston, representing banks, real estate developers, and wheeler-dealers in the boom-bust Texas markets for the past forty years. For more information visit www.mackgibson.com, and connect with Gibson on Facebook, Instagram and Twitter.