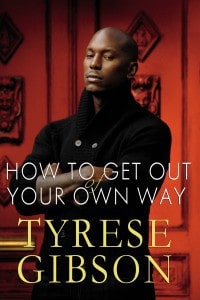 They say things are getting better.

They say things are looking up, that we’re starting to recover.

But they couldn’t prove it by you. For months now, you’ve been spinning your wheels in the sand, your dreams on hold along with your life. You’re wondering if the economy is to blame or if there’s something else…

In the new book “How to Get Out of Your Own Way” by Tyrese Gibson, you’ll see that your problems may be attributed to something much closer.

Growing up in a rough area south of L.A.’s Watts neighborhood, Tyrese Gibson had plenty of opportunities to get in trouble. Gangs were all over, but – despite that his father was absent and his mother was an alcoholic – Gibson somehow avoided the worst. It helped that his stepfather guided him, and that he had a regular church life.

He also had a goal: to make music.

Gibson says he loved to sing and perform, which led him to win a talent contest and which opened the doors to a multifaceted career. Gibson is usually known by only his first name to fans of his movies and music.

But “Over the last decade, I have come to realize that God’s purpose for me is to reach out to people,” he says. “… I want to give people permission to want better for themselves…”

This book is the result.

The first step in taking your life “to another level” is to “know that there are better circumstances you can be in.” Learning to love yourself enough to find them is “technically getting out of your own way.”

Learn to think differently, he says. Find a positive spirit, stop living negatively, and clean up your surroundings. If people think of you the wrong way, work hard to change that. Become a role model, especially for your children. Wisely choose your “circle of five” and don’t hang out with anyone who doesn’t deserve your time. Share your ideas with the world. Understand that “selfish” isn’t necessarily a bad thing.

“Always be strategizing and you will be prepared for the good and the bad.”

Tired of going nowhere, fast? “How to Get Out of Your Own Way” may help motivate you. Or maybe not.

There’s no doubt that this book will help readers to stop sabotaging themselves and their careers. Author, singer, and actor Tyrese Gibson offers sound advice mixed in with personal anecdotes that well-illustrate his points, and his words will resonate with today’s youth.

And there’s the thing: “How to Get Out of Your Own Way” seems geared more toward younger readers in need of a boost. Gibson, in fact, devotes several pages to teens and an entire segment to dating-mating issues that most older adults likely won’t find relevant.

I think, if you’ve been around the block awhile, “How to Get Out of Your Own Way” probably isn’t a good fit for you. But for new grads or someone who’s landed that first important job or date, you’ll have a hard time finding something better.

The Bookworm Sez: “Girl, Get Your Mind Right!” by Tionna Tee...

The Bookworm Sez: The Magic Room by Jeffrey Zaslow

The Bookworm Sez: “You Are What You Wear” by Dr. Jennifer...