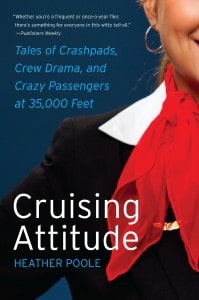 Sleep was all you wanted, but it wasn’t going to happen.

You knew as soon as you buckled yourself in, that it didn’t look promising. Your Chatty-Cathy seatmate pounced on you right away with friendly questions that weren’t deflected by closed-eyes-as-hint. Then the kid behind you kicked the back of your seat, thumpa-thumpa-thumpa, before he began to bawl.

You knew how he felt: you wanted to throw a tantrum yourself.

Instead, you snagged an airline attendant, who tried to make things better for you. And in the new book, Cruising Attitude: Tales of Crashpads, Crew Drama, and Crazy Passengers at 35,000 Feet

by Heather Poole, you’ll see that you had a chance to make things better for her, too.

Heather Poole never wanted to be an airline attendant.

There was always another, better job waiting for her. Sales, maybe, or something else, she wasn’t sure. She applied for airline attendant training only because of the perks, especially the free flights.

The mistake was in mentioning that.

A couple years later, when the other, better job hadn’t materialized, Poole tried again and soon found herself working for a small, regional Texas airline. There, she flew short trips and was home the same night, working under rule-bending conditions that passengers, fortunately, rarely knew about.

Then one day, she realized that first-class wasn’t just a spot in the plane. Poole wanted to work with a bigger airline that traveled wider, so she applied for (and was given) training with an unnamed national carrier.

But becoming an attendant on a major airline wasn’t for cowards.

Poole and her fellow schoolmates endured weeks of attendant boot camp. Prospectives and newbies were drummed out or quit in droves but Poole persevered and graduated, with New York City’s airports as home base.

In this book, she writes about crazy co-workers and frustrating fliers. She explains why dating a co-flier isn’t a great idea and why your determination to join the Mile High Club could get you into a mile-high pile of trouble. She shares some “amazing moments,” brushes with fame, and some tips on getting the best service and the most comfort the next time you take to the air.

“Cruising Attitude” is a fun book. But you’ll also experience a lot of turbulence when you read it.

It takes plenty of work and dedication to be an airline attendant, as author Heather Poole proves. Training was exhausting, and airlines enforce employee rules that are followed without exception. Days “off” aren’t always off, and attendants sometimes work sick or else lose their jobs.

That part is interesting, but Poole truly shines when she gives readers what they came for; namely, dirt on co-workers, customers, and corporate. Unfortunately, that’s just less than half the book and it’s plagued by name confusion and mid-thread thought-switching that really rattle a reader.

Overall, though, despite its excess baggage, I think this book is worth a read because, for both traveler and attendant, its perks outweigh the irks. Just beware that you’ll want to buckle in, however, because “Cruising Attitude” is a bit of a bumpy ride.