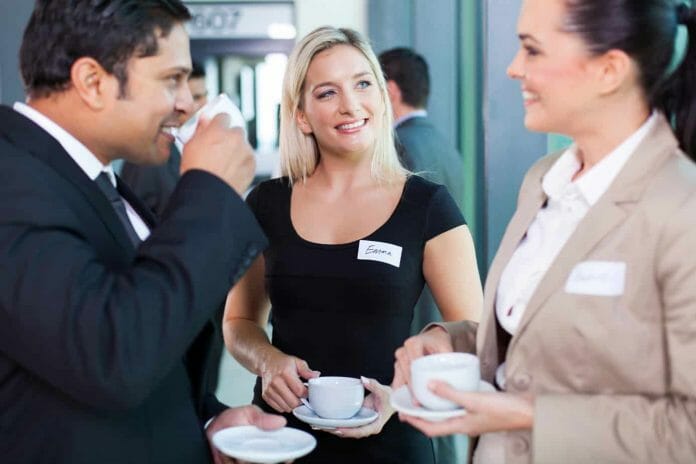 Whether you’re at a networking event or a conference, a great ice breaker can help you make a memorable first impression with someone you meet for the first time. That encounter can ultimately lead to a long-lasting friendship, relationship or a valuable partnership. Below are some specific tips on effective ice breakers you can use in different scenarios to get those conversations started.

Marcia Rhodes, regional managing director for Amendola Communications, was out with her girlfriends one evening and began posing for group photos at a Scottsdale, AZ restaurant when one guy approached her and asked, “Do you actually enjoy having your photo taken?”  Rhodes replied that she’s in PR and therefore it’s part of the job. That started a warm conversation which led to several dates.

“I wear items that people can easily comment on, such as a pin, scarf or unusually large watch,” she says. “Sports jerseys almost always trigger a conversation. Last month, I wore my Seahawks shirt to a sports bar and a fellow Seahawks fan spotted me and gave me the thumbs up from a distance. So I approached and we chatted for half an hour.  When I see someone wearing something unusual, be it man or woman, I always ask where they got it and they are always eager to tell me about the item.”

Robin Randall, creator of Curioso Cuff, an interactive wrist accessory, agrees. “Not only does a great piece of jewelry or a fashion accessory add a crisp accent finish to any outfit, but it also makes a great conversation starter.”

Randall designed her Cuff—an opalescent stone that lights up three ways by pressing it—to be an ice-breaker that can spark conversation and even curiosity.

“We named it Curioso Cuff because we wanted it to be a little mysterious,” Randall says. “The filigree weave design is adjustable and designed to be full of whimsy. If you remember the mood ring, that was a conversation piece, as well. This is a similar thing.”

Randall and some friends have worn them out on several occasions and it generates the interest — and conversations — she had hoped it would. “Women in boutiques have come up to me and asked about it. I remember one man in a bar at La Guardia Airport in New York ask me if there a reason that my bracelet is lit?”

2. Focus on the One Individual

For Jeanne Achille, chief executive officer of the DEVON Group, the most effective ice breakers are those focused on the individual with whom you’re seeking to converse – far more impactful than some contrived, canned sound bite.

“Compliment the individual on their smile, their great handbag or ask what they think of the signature drink being served at the event and you’re well on your way to further dialogue,” she says.

For people who aren’t generally outgoing, they might not realize that approaching someone and asking them about their self is often very pleasing to the person, notes Julie Talenfeld, President of Boardroom Communications.

“I always think of ways to go up to a stranger at a networking event to incorporate what I do for work by asking them what they do,” she says.

For instance, she would say, “Hi, I’m Julie, I have a public relations company, what do you do?” It’s basic and it shows the person that you are interested in him or her.

“You’ve now made a connection and should continue asking the person about their job and even where they went to college,” says Talenfeld. “Showing that you are interested in others is almost always perceived as a positive—and showing your interest shows that you are taking an interest in them.  The person might even be shy, like you and are then really happy you worked to make the introduction.”

3. Talk About Food and/or Drink

If you’re in a social situation, such as a bar or party, and want to chat with someone you might have your eye on, discussing food and drinks is a great way to break the ice, says Astroglide’s Resident Sexologist, Dr. Jess.

“Ask about their preferred drink or discuss the menu at the party,” she says. “Across a range of cultures, food creates social bonds and is connected to identity and self-expression. Accordingly, it’s no surprise that food ranks as a top interest and marker of attraction in online dating profiles.”

4. Ask About Their Weekend

Dr. Jess adds, “If their answer is rather vague, they may prefer to segregate their social and business relationships, but if they open up about specific plans, people or experiences, it may be a sign that they see you as more than just a colleague. “This doesn’t mean their romantically interested, but it’s a start.”

No question, it can be intimidating to go solo in a professional setting, says Matthew Randall, executive director of the Center for Professional Excellence at York College of Pennsylvania. One of his tips to break the ice at professional events such as networking hours or conferences is to bring a “wing man” or wing woman” along.

“You’re putting yourself out there with potentially serious ramifications for your career,” he says. “Instead, it can be helpful to have a wingman or wing woman to watch your back and advocate on your behalf.”

At networking events or professional conferences, the ice between making new contacts can be too thick to break on your own. Working as a team doubles your chances of being seen and heard.

When in a group conversation, many seasoned professionals will maintain a conversation but as they’re talking, they’re also scanning the room for people who might want to join the group but aren’t sure how.

“There’s no reason why you can’t do the same when you see someone you know struggling to join the conversation,” says Randall.

It’s important to be an advocate for others, especially when they’ll return the favor for you, but be cautious about putting your credibility on the line.

As a young professional, you don’t have the stock to vouch for just anybody if they  truly aren’t a good fit,” says Randall. “Whoever you bring into the group conversation is a reflection on you and your credibility. If you bring in someone who fits in perfectly, you’ve just established yourself even more. But bring in someone who appears incompetent and the group is going to think you’re no better.”

Over the past 20 years, Keith Rollag, Associate Professor of Management and Chair of the Management Division at Babson College and author of “What To Do When You’re New:  How to Be Comfortable, Confident, and Successful in New Situations” has focused his research on how to be more successful in new situations, and has interviewed hundreds of people about their challenges with networking, new jobs, and attending conferences. Based on his research and interviews, one of his icebreakers is to lead with the fact that you’re new to the networking event or conference and then ask a genuine question you have about the event.

“If the other person is also a first-timer, you can commiserate on the challenges of being new,” he says. “If they are a regular, you’ve just shown respect and deference to their experience and have put them in the role of teacher, which for most people makes them feel good, gives them purpose, and brings them energy.”

As a result, they’ll start by answering your question, and from there you often can find other segues into new topics.  More often they will think of all kinds of things to tell you about the event (and themselves), and while they may do most of the talking they walk away with a positive impression about you as an open learner, good listener, and respectful person.

9. Ask Them About Themselves

Tell me about yourself. It may sound like a corny opening line, notes Rollag, but researchers have found that most people tend to gain energy by talking about themselves and in turn have a positive impression of those who listen to them.

“By starting with such an open ended question, you give them control over the situation and allow them to talk about things that bring them energy,” he says. “Listen intently and ask questions about what they tell you, and the conversation will move forward. Then look for opportunities to talk a bit about yourself.”

People meet each other at networking events or conferences precisely to get to know each other, teach yourself, and learn about more good books, so why not lead with it?

10. Use the Journalist Hack of Who, What, Where, Why, When, and How

Running these questions through your head can sometimes trigger some useful icebreaker lines that are appropriate for the situation.

The most obvious ones, according to Rollag, include:

Daniel Casciato is a freelance writer who is originally from Pittsburgh, PA. He often writes about emotional intelligence, health, marketing, relationships, social media, and technology.

Advertising message: To learn more about additional products to help you lose weight such as okinawa flat belly tonic reviews, read on.