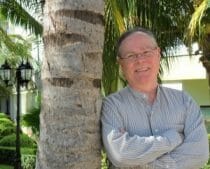 By Mike Love
Author of Confessions of a Recovering Stupid Male

I met my wife Shelley in March 1984. I knew this couple from college who decided to go out to a popular bar and invited me to join them. It became a night of synchronistic experiences where I was able to enjoy observing those around me.

Half way through the night I was approached by a young, beautiful brunette with mesmerizing blue eyes, who asked me to dance. As it turned out, we danced until closing time. We dated, at first going out for coffee, and then movies, dinners and dancing.

From the beginning our relationship was rocky. After dating for several months we moved in together. Immediately I expected her to have dinner for me on time, dishes cleaned and clothes washed, and sex 24/7. I also wanted her to take care of all my needs and be my trophy girl to show off to all my male friends and prove that I could attract a beautiful woman.

We lived together for a year before we got married, and waited three years before we had our first child. Our son had a difficult birth and was prone to pneumonia and frequent visits to the hospital. He suffered from upper-respiratory issues until he turned eight.

Our second son was born two years later. It seemed after this my wife put more energy in our two boys and less time with our marriage. We became more estranged and emotionally drifted apart from each other, resulting in constant arguments and hurtful words.

As I entered midlife transition I became more depressed, unfulfilled and wanting to recreate my youth. I started frequenting bars more, either with friends or by myself, and spending less time at home.

During our years together we had been to several therapists to deal with our marital issues. I had even gone to private counseling but dropped out when I perceived not getting anything out of it. As this continued, the arguing increased, and our marriage was sinking into a mire of despair.  My young boys would hide in their room until the fighting was over. There was no physical abuse, but much mental and emotional bullying on my part.

In short, I wasn’t happy with my life. I was discouraged and burned out with my career, feeling helpless, angry, and emotionally confused. This is not what I thought my life would turn out to be as I entered my forties. I felt like life had passed me by. I was rapidly heading toward old age and eventual death. I blamed my wife for the fate I’d been dealt, which affected our marriage even more.

Everything came to a head in May of 2003. It was Sunday and we had planned to take the boys to a movie. I had awakened in a very foul mood and before long we started arguing again. One thing led to another that turned into the most explosive argument in our eighteen years of marriage. The most hurtful words were said to each other. Threats of splitting up came out of my mouth. As the exchange accelerated my wife screamed that if I didn’t like the arrangement then get out! She then walked out the door, got into her car and left.

The boys and I left for the movie. Attempting to put on a “happy demeanor” for them, I was seething inside with hatred and anger toward her. But once at the theatre, I became sad and remorseful, believing I had finally crossed over the line, and would find my belongings thrown out onto the lawn when I got home. I foresaw separation and divorce in my future. Amazingly, when we got home she had returned and none of my possessions were thrown outside. In that moment I realized how wrong I had been through the years and how deeply I loved her, not wanting to lose what we have together.

I embarked on a life altering introspection to change the course I was headed. As I move forward I discover the global illusion of the “macho male” persona I had been brought up in from my youth. It’s all about the journey, not the destination; therefore, I am proud to call myself a recovering stupid male. This path has led to living in unconditional love as a light in my universe. My wife and sons now live encompassed with love, laughter, and acceptance. May your universe soon be the same.

Mike Love is an inspirational coach and lecturer with more than a 25 years of counseling experience. His book Confessions of a Recovering Stupid Male follows his journey through his 18-year rocky marriage to his realization that he had to change in order to save it. Addressing important issues like men’s anger and violence, midlife transitions, infidelity, love, sex and intimacy, Love empowers men and women by helping them live authentic, inspired lives in meaningful relationships.