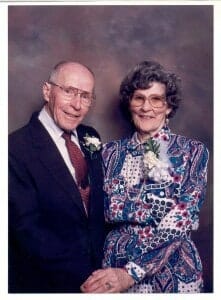 Editor’s Update: John Baumgarten, 93, wrote and sings “Goodbye to the Sweetheart of My Dreams”–a song dedicated to his late wife, Madeline. John sang the song to Madeline on the day she was buried. Since then, every day he can, John visits her grave and serenades his sweetheart. Just click on the image to check out the video.

John is a spry, likeable man with bright eyes. At 93, he recalls names, dates and events with impressive clarity. He will gladly tell you about his family and he still remembers the day he met Madeline, the love of his life, like it was yesterday. Actually, it was the early 1930s – and to this day John remarks that he was even impressed by the way she said “hello.”  He married his love in the summer of 1937.

John and Madeline first came into contact with Family Hospice and Palliative Care in December of 2007. A cardiac patient, Madeline’s initial prognosis was one to two months. But John says she endured a year and a half past that prediction, passing away just days before their 72nd wedding anniversary.

When most people of his age just want to kick back and enjoy their retirement years, John Baumgarten is doing anything but. You see, in his younger years, John played guitar in local country bands, performing at dances and picnics. It was at one of these events that he met Madeline – on a blind date in 1933. Eventually, John claimed “Goodnight to the Little Girl of My Dreams” as “their” song. Upon Madeline’s passing, John altered the tune’s words, renaming it “Goodbye to the Sweetheart of My Dreams.” John sang the song to Madeline on the day she was buried. Since then, every day he can, John visits Madeline’s grave and serenades his sweetheart.

It was while he was at the cemetery one day when another man heard him singing and suggested to John that he ought to record the song. Thus began John’s mission. As a tribute to Madeline, John is seeking to have the song copyrighted. And while John can recite memories of his long career as a working man, it’s safe to say that no job has ever been as important to John as this quest for a copyright.

At Family Hospice and Palliative Care, we are dedicated to helping every person we touch make the most of every day – living life to the fullest, in comfort and dignity. John Baumgarten is a perfect example. John’s mission began with his desire to honor his wife. He eventually found a local recording studio, Imagine Studios in Carnegie, to help him record the song. Along with working on the copyright application, John is sending out copies of his CD in hopes of having it recorded by a local artist for wider distribution. John’s goal is not monetary gain, but simply a lasting tribute to his sweetheart.

John is doing all he can to achieve his goal. His niece and granddaughter are helping him spread the word, and his local newspaper published a feature article on him and the song. John’s spirit and drive truly embrace the hospice philosophy of doing all you can with every day you have. Family Hospice staff feel privileged to been part of John and Madeline’s lives – and John is appreciative of the care provided by Family Hospice, which he feels played a part in him being able to enjoy a little extra time with Madeline.

“They take each patient as their personal responsibility,” said John.

John’s commitment to his mission is also an important lesson for caregivers. The responsibility of caring for a loved one on hospice care can be taxing, both physically and emotionally. Our team often reminds caregivers to take care of themselves, too. It is important that primary caregivers stay active, pursue their interests and maintain a healthy lifestyle. John Baumgarten is doing just that.

As John awaits word from the U.S. Library of Congress on his copyright request, Family Hospice is honored to share his story — and share his example of living life to the fullest.