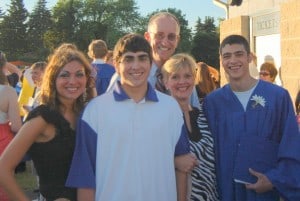 “I don’t know how you do it,” my next door neighbor said to me as I was unloading my three small children from my car.

“What are my options?” I laughed.

I became a single parent when my children were 1, 3, and 5. It wasn’t an easy transition, but one that was necessary for a happier and healthier family. As hard as it was to do it on my own, I knew it was better for all of us, most importantly, my children.

Since I was truly a single parent, I was lucky to have the strong support of my parents who lived nearby. Although I was doing it alone financially, they helped in so many other ways, including having my dad be a strong, male role model in my children’s lives.

Over the years, I often joked that I was the “token” single parent of our upper middle-class community, but of course, that wasn’t true – it just felt like it at times. Nonetheless, we forged ahead, out little troop of four. One day my son said, “Mommy, I’m glad we don’t have a dad because I think we are closer.”  I felt like it was true.

I was also lucky that as a journalist, I could work from home and thus avoid expensive childcare. We may have had far less material items than others in our neighborhood, but we were happy. I think my kids are more caring individuals and resourceful because they know how to work as a family team and what is really necessary to survive.

The hardest part of being a single parent was perhaps, the comments of others. When my sister complained that her husband was out of town and she had to take out the trash, I asked her who she thought took it out every week at my house. Another friend asked me who would want to date a woman with three little children. Fortunately, I did date and they were even nice men! And of course, there were the veiled comments about how children from single-parent homes don’t do as well as those from a two-parent home.

Two years ago, I married a wonderful man. I am lucky. But I am even luckier in the way my children have turned out. My daughter, now 20, is entering her senior year at Duquesne University where she has been on the Dean’s List almost every semester and has just won a national scholarship contest. My son, 18, will enter the Honors College also at Duquesne and received the Rotary Scholarship in our community. My youngest who just turned 16, is the happiest guy in the world and everyone loves him. No matter where we go, someone knows Cole.

My advice for single parents? You can do it alone. The hardest times will only make you closer to your children. Don’t listen to others rude comments, only words of support. Your kids will be great and you will survive. I know. I have been there.

3 Ways to Give Back to Your Community During COVID-19

The Specialty of Custom Embroidered Hats ﻿

7 Great Tips To Get More Organized With Meal Prep﻿

Learning about a Wide Range of Gas & Liquid Flow Meters...