Online dating coach and creator of CyberDatingExpert.com, Julie Spira believes that everyone wants to love and be loved. When a relationship ends, you become lonely, depressed, and frightened.

“You wonder if you can ever find love again, but you can and you will,” she says.

But when you’re back on the dating scene again, she says to be sure to accurately represent yourself and your relationship status before starting to date again.

“More often than not, you will need to have a transition person, I fondly refer to it as the ‘T.P.’ to help your through the process,” she says. “You really won’t know exactly what you are looking for while going through a divorce or suffer the loss of a spouse.  Many singles rush into relationships prematurely thinking that will help the loneliness, but time does heal all wounds. Too often online men will say they are ‘Divorced’, when in fact they are ‘Separated, Divorce Pending.’”

Spira filed for divorce herself just before Christmas several years ago. It was a very difficult process as her ex-husband moved out over Thanksgiving, so it made the holidays very traumatic.

“He was much more prepared than I was, as I believe he had been planning his exit strategy for about a year,” recalls the Los Angeles resident. “The divorce process was not a smooth or quick one.”

Spira and her husband were married for almost five years after meeting on an online dating site. They were engaged in just six short weeks, had a fairytale wedding at The Bel Air Hotel and a romantic honeymoon in Bora Bora. 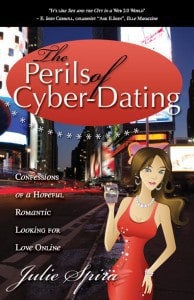 “I was unaware that moving just one county away would have an impact on my dissolution or the choice of attorneys,” says Spira. “In the end, he delayed signing the divorce papers just to drag it out. I went on consultations with three of the top attorneys in Los Angeles. I felt completely overwhelmed at the time.”

But friends and family helped her through this difficult time.

“I have a fabulous girlfriend network and they were at my side during the process,” says Spira. “As half of the furniture was removed when he departed, there was no bed in the master bedroom. One of my girlfriends sent over a truck with two beds to replace the ones that were gone and friends would send over food daily.”

A very close girlfriend of Spira took her with her family to Maui the day that she filed for divorce. She says she spent five days in a cabana and cried the entire time.

“I knew it was a transition period for me and that the support from my friends and family would help me through this difficult period,” she says. “My neighbors became my family during this difficult time. They would come over with food on a daily basis and made sure to invite me over for Christmas and New Year’s Eve as a break up or a divorce during the holiday period is magnified dramatically.”

Her happily married parents are truly her inspiration. They have supported her through many phases in her life.

“I am so fortunate to have had them at my side when I became divorced,” she says. “They encouraged me, cried with me, and cheered me on as I reinvented myself.”

Spira truly believes that we learn from our past lessons. Today, she says that she is much better off without the man that she married. During the five-year period they were together, she was a devoted stepmother to his two children, who she considered her own.

“I know that their lives are so much better because of the love and values that they learned while living with me,” she says.

As a result of her experience, Spira has become the bestselling author of “The Perils of Cyber-Dating: Confessions of a Hopeful Romantic Looking for Love Online.”

“I decided it was time to turn lemons into lemonade, so I wrote about my experience in a chapter of my book, “The Perils of Cyber-Dating,” so I would be able to teach other women how to spot the red flags and could share my experience of the dos and don’ts of online dating,” she says. “My book is a gift to singles looking for love online. Without this traumatic divorce, I might not have written this book.”

After losing her stepchildren, Spira became involved with two non-profits in Los Angeles that support mentoring of teens. She also joined the Board of Directors of Jewish Big Brothers Big Sisters of Los Angeles and became a “Big Sister” to a 10-year old girl in Los Angeles.

“We have been matched for five years now,” she says. “In October, 2010, I was the recipient of the WOW Award from JBBBS for my charitable work in the community and for making a difference in the life of my ‘Little Sister.’”

Spira also remains extremely passionate about helping singles find love online. After her divorce, she became engaged to a doctor who saved her father’s life. As an early adopter of the Internet, she was one of the first to create an online dating profile in 1994. Now, she combines her marketing experience and passion for helping singles, so she marries love and technology with her online dating advice.

“I learned the art of how to create an Irresistible Online Dating Profile and am determined to make sure that singles date online safely,” she says. “As a former radio broadcaster, I dusted off the microphone and reinvented myself on the air again as the host of “Ask the Cyber-Dating Expert Radio Show.”

She is also working on the film adaptation of “The Perils of Cyber-Dating” and is writing two more books.

“Understand that you may not know exactly what you are looking for at the time you become single,” she says. “Surround yourself with friends, but don’t be a ‘Debbie or Donny Downer’. Your divorce has a shelf-life and after a while, your friends won’t want to hear the details. Think about moving forward and imagine the type of person you want in your life. For the women, realize that we are genetically wired to reinvent ourselves over and over again. I started my life over in my late 40s after my divorce and became a bestselling author at 52.”

Julie Spira’s dating advice has appeared in The New York Times, Los Angeles Times, Men’s Health, Woman’s Day, WIRED, PC World, BBC, ABC News, CBS News, CNET, FOX News, Glamour.com, Cosmo Radio, eHarmony, JDate, Your Tango, Betty Confidential, iVillage, and more. She is the LA Dating Advice Columnist on Examiner.com and also writes about relationships on Huffington Post. She is also the host of “Ask the Cyber-Dating Expert Radio Show,” and speaks regularly at social media and dating conferences about the marriage of love and technology. She is also the CEO of Social Media and More, a social media marketing company. For more information on Julie, friend her on Facebook or visit her website..